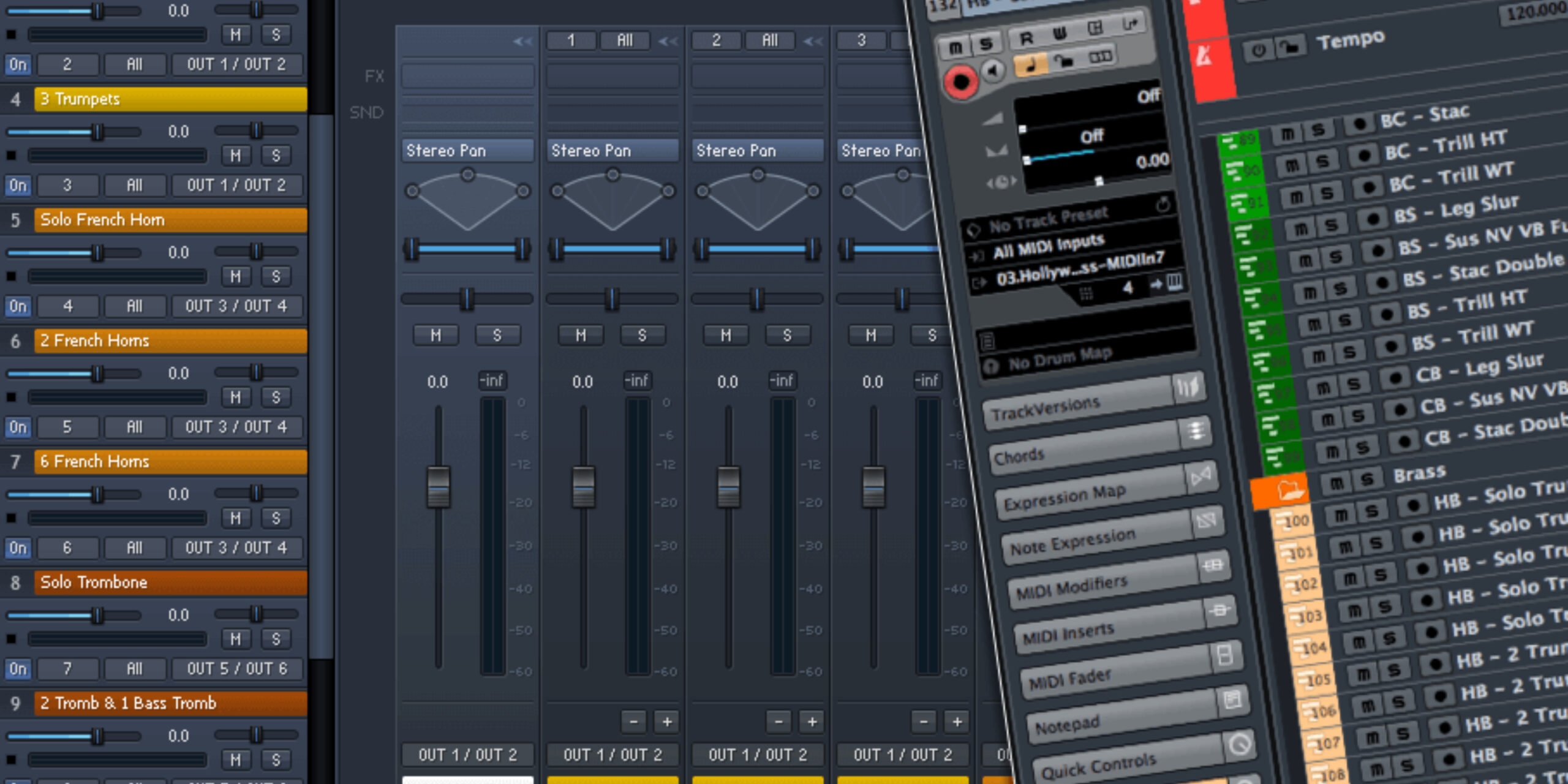 Why use a template?

There are plenty of reasons for setting up templates to use when starting a new project.

When I started creating templates, I made the mistake of adding instruments as I went along, without considering the whole picture first.

Before you begin, plan out template elements such as key-switches, track naming, routing and grouping in advance. Think about which instruments you’ll be hosting inside VEP and which will be loaded directly in your DAW.

It’s also vital to take into account the limitations of your setup. How much RAM do you have? How many instruments can you load at one time before your computer slows to a crawl? Which instruments do you always use? Do you really need all of those articulations?

Most libraries now come with built-in key-switching. Many composers take advantage of this (along with Cubase Expression Maps or Articulation Sets Logic X) to reduce track count and simplify the composition process.

Many like to use a separate track for each articulation of an instrument. Whichever workflow you prefer, be clear in your mind on which approach you will take (or if it will be a mixture of both) before starting your new template.

I use Metagrid on my iPad to key-switch via Cubase Expression Maps and SkiSwitcher2 when using Logic X.

Such a fundamental part of your template can quickly get confusing once your track count grows and along with it, the number of instrument libraries used.

For example, you may have several string libraries that you blend to get a sound you like, how are you going to differentiate between them your DAW? Will you use naming conventions in sync with the library producers, or will you create your own? My personal solution is to use the same naming convention for all libraries and prefix them with the initials of the library. So below I have the 1st violin tracks for

My personal solution is to use the same naming convention for all libraries and prefix them with the initials of the library.

I use Vienna Ensemble Pro (VEP) to host my orchestral libraries outside of Cubase/Logic.

No matter which DAW you use, I strongly recommend using VEP for setting up large templates.

Over the last couple of years, I’ve found that the amount of separate templates I have for different libraries has increased to unhelpful levels. So I’ve recently reconfigured my setup using a modular approach. This means I’ve created an individual VEP Project for every library I own. So I have one for Spitfire Mural, one for Cinematic Strings, one for Cinebrass etc.

In Cubase, I set up a template with tracks and routing already set up for every library I’ve created a project for, but I don’t connect them. At the beginning of a new project, I fire up my master template then decide which individual projects to load into the VEP server. This means I can keep computer resource usage at a minimum while still having all of my instruments at my fingertips.

An example setup may consist of the following instances:

The libraries themselves are shared between my production machine (iMac) and my slave PC. Using the modular method, I now only have one orchestral template. Well, make that two, see ‘Going on a Template Diet’ further down the page.

This is where things can get a little complex. Ideally, you should have a separate bus/group track for each instrument of the orchestra. That instrument is routed to its section bus/group. So the Flute would have its own bus (where you can apply EQ and reverb as required), which flows into a ‘Woodwinds’ group bus, where you can make additional adjustments to the entire section.

If you are combining both wet and dry libraries, create separate group busses, such as ‘Woodwinds – Reverb’ and ‘Woodwinds – Dry’, so you don’t end up applying reverb to instruments that already have the room sound baked in. All orchestral sections are then routed to a ‘Global Reverb’ bus to help glue everything together, then to the final mix bus.

As one of the benefits of setting up a template in advance is the speed at which you can begin a project, does it make sense to pre-mix your instruments – either in VEP or your DAW – beforehand?

Personally, I’d say yes, with one caveat. I’d recommend only doing the basics, such as panning sections, setting up preferred EQ for different libraries.

By all means, set up the reverb, other effects and even the mastering chain you’re likely to use in every project. But then bypass them and then to be used a starting point when you begin the mixing process. The reason is there is no ‘one size fits all’ solution to mixing, and while it helps to have your plugins in place, don’t count on their configurations working well for every project.

Whether you mix your instruments in VEP or directly in your DAW is up to you, both work well. I usually adjust levels to balance out the libraries in VEP, as they are unlikely to change. I apply reverb and EQ inside my DAW. If you’re working on a project with multiple cues where you want the same sounds, mixing as much as you can in VEP might be beneficial.

Going on a Template Diet

Once I’d used my master template a few times, I decided to create a second ‘Lite’ version. This would ideally contain the same instruments but with fewer articulations and simplified key-switching.So I asked myself:

Following this, I began to trim out articulations I didn’t often use, only loading the essentials for every instrument section.

Then, using Cubase Expression Maps/SkiSwitcher2 to switch midi channels per articulation, rather than using regular key-switches baked into the libraries, I created sixteen (yes, only sixteen) nice big buttons on my iPad which are the same no matter which instrument or library I’m using.

I can’t describe how much this has streamlined my composing process. I now find myself using the ‘Lite’ template 90% of the time. If I ever need an extra articulation, I just load it directly into the DAW. Which is a surprisingly rare occurrence.

It also means I can have nearly all of my instruments open and ready to go. With maybe one or two Kontakt libraries with their samples purged to give me a little more processing wiggle room. Hopefully, this article has offered a little help in setting up your orchestral template. It’s a vast subject, and I could go on for hours about it.