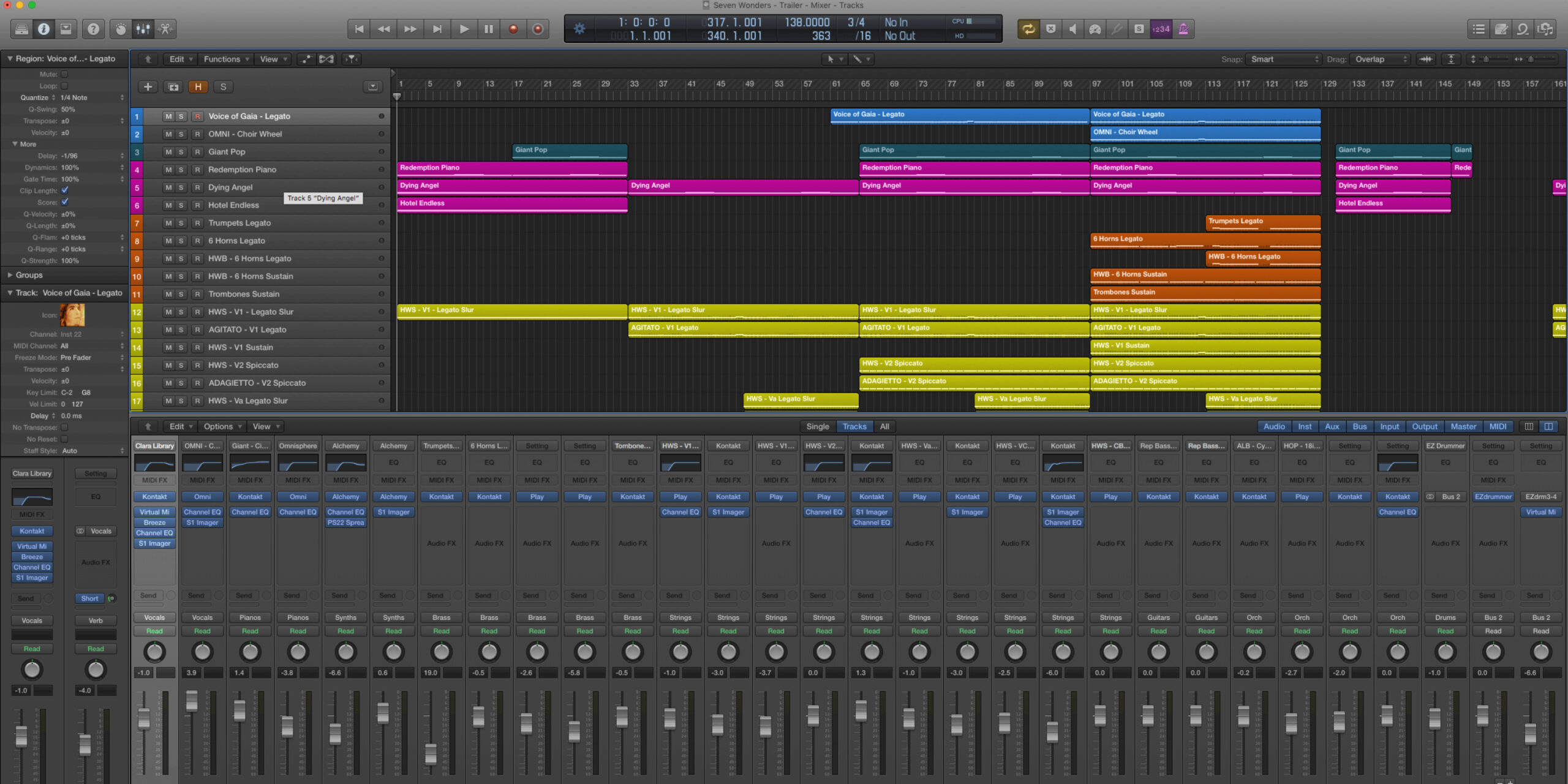 Over the last few decades, trailer music has become a genre in itself, with dedicated production studios such as Two Steps from Hell crossing over into the mainstream consciousness.

Vertical Composing is a term coined to describe the way many trailer tracks are structured. Essentially it means that instruments and sounds are gradually layered on top of one another as the piece progresses.

This is an art in itself, Hans Zimmer is the master at making his compositions sound ‘huge’ while still being musical. It’s essential to make sure the frequency spectrum is nicely filled without resulting in a muddy mess. Trailer music usually has a three-act structure.

It’s helpful – but not required – for music editors if there is a gap in between the sections, as several different pieces of music might be used in one trailer. Imagine each chapter as an individual track in its own right.

There aren’t really any hard and fast rules on the length of the track, however, as a rough guide, it doesn’t hurt to start out with each section lasting 30 seconds. Around 2:30 is the maximum to aim for.

You can also vary the structure creatively by adding percussion hits, or a few bars of sparse instrumentation in between the second and third acts. In my experience ‘cold endings’ are preferred. In other words, the track should build to a big finish and come to a full stop. Occasionally a softer ending might be requested, where the track still comes to a big climax but includes several seconds of lighter instrumentation as the credits roll.

Hybrid trailer music will also include a great deal of sound design, effects and synths, in many cases taking priority over the orchestra.

Choirs are often brought in towards the finale. However, they appear to be used less frequently these days, possibly due to overuse and the danger of verging into cheesy territory.

Remember that trailer music doesn’t have to be a ‘wall of noise’. The guys at Two Steps from Hell create trailer music that combines styles from many genres and often leans towards more traditional orchestral arrangements. They’ve been incredibly successful, and it’s more than likely you’ll have heard at least one of their tracks in trailers or on TV, even if you’ve never heard of them.

As in any musical genre, there are a million and one trailer tracks out there that mostly sound the same. So when creating any piece of music, it’s essential to try and put your own stamp on it. Once you know the rules, it doesn’t hurt to play with them a little. Introduce an instrument that you haven’t heard in this context before, or subvert the listeners’ expectations in some way. It can often be the most straightforward hook that makes a track stand out from the crowd in some way. Hopefully, this brief guide to composing trailer music has helped.